The FDSA’s Grow the Game Campaign 50/50 fundraiser had its first draw on Friday February 12th via Facebook Live!

The fundraiser is off to a flying start with more than 175 tickets purchased! The jackpot reached $356.

The winner of the Early Bird draw is: Marlene Robison

Congratulations to both Scott and Marlene!

The next draw takes place Friday Feb 19th at 8pm. Get your tickets:

Apr 16th Draw brought to you by: 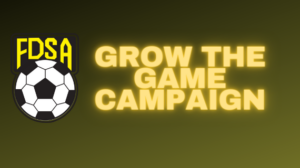